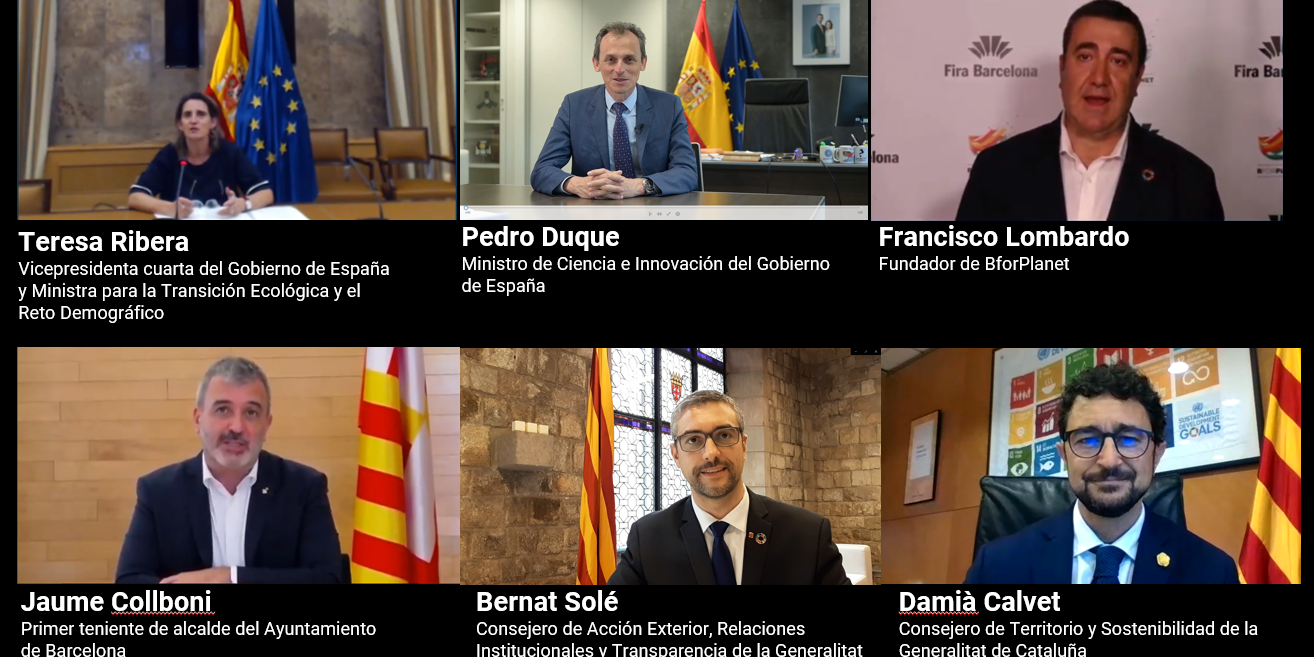 Barcelona/Madrid, 9 July 2020. More than a thousand people from all over the world have followed today the first virtual meeting BForPlanet-Live, for a sustainable future, in which outstanding personalities from Spanish and Latin American politics, the business world and civil society have participated. Teresa Ribera, Fourth Vice-president and Minister of Ecological Transition, and the Minister of Science and Technology, Pedro Duque, were some of the participants in this first BForPlanet-Live meeting, which reflected on the need to promote the Agenda 2030 and sustainable development at a time of extraordinary complexity derived from the health crisis of the COVID-19, and to promote a change of paradigm that places sustainability at the centre of political, social and business agendas.

In the first of the virtual meetings organized by BForPlanet after the state of alarm, prominent personalities and opinion leaders in the field of sustainability have come together to address the validity and suitability of the United Nations’ Sustainable Development Goals (SDGs) in the reconstruction of the post-COVID world system. This was expressed by the Fourth Vice-president and Minister for Ecological Transition and the Demographic Challenge of the Government of Spain, Teresa Ribera, with respect to the importance of the United Nations SDG’s for the Government of Spain, which has incorporated them transversally as part of its State strategy. For the Government of Spain, promoting and supporting actions and multi-sector meeting points such as BForPlanet, born from, by and for Sustainable Development is crucial, and more so, at times of extraordinary complexity such as the present, in which it is urgent to take sustainability as a point of reference and promote innovative, committed and respectful models.

Aspects such as the Ecological Transition and the demographic challenge are of vital importance to the Spanish Government, which has elevated them to the rank of vice-president. In the words of Minister Ribera, «the post-COVID global social and economic recovery requires more commitment and more sustainability than ever in order to ‘leave no one behind’ and to foster resilience and adaptation to challenges such as the climate crisis».

«The impact of the measures we have had to adopt to stop the spread of the virus has been a major blow to the economy and to society, with the risk of aggravating inequality gaps,» according to Ribera. She concluded her speech by stating that it is urgent to «act with caution in the face of the virus, at a time when we have the opportunity to rethink the system. «The more united we are and the more alliances we forge, the easier it will be to move forward on the path to sustainability». And BForPlanet, in Teresa Ribera’s opinion, is an opportunity to move forward in a suitable framework of alliances.

In this sense, Pedro Duque, Minister of Science and Technology, said that the SDG’s «are much more than a road map drawn up by the United Nations», insofar as, he said, «the progress of Spain and the world must be undertaken in a sustainable manner». The contribution of science and innovation to sustainable development is essential, according to Minister Duque, who referred to SDG 3, 7 and 13 (Health, Clean Energy and Climate Action, respectively), in which science, research and knowledge play a decisive role. Guaranteeing a sustainable future and a competitive economy are strategic issues for the Spanish Government, and require a framework of cooperation between countries and decision-making based on scientific knowledge, said Duque in his speech at the BForPlanet-Live meeting.

From his side, Francisco Lombardo, founding partner of BForPlanet, has underlined the validity of the «SDG’s as a tool and a roadmap to ensure that the global post-COVID reconstruction is carried out in an adequate and sustainable way. The SDG’s are more necessary than ever; and especially, SDG 17, the instrumental objective that the United Nations has given us, with the purpose of promoting a global alliance in which the main actors participate: governments, private sector and civil society». In the opinion of Francisco Lombardo, «there will be no future if it is not with alliances around sustainability. We are on time to make the right decisions».

BForPlanet-Live, by and for sustainability

BForPlanet was created with the aim of providing environments for dialogue and a platform for discussion and dissemination of key issues, such as the sustainable reconstruction of the economy, the development of global systems for rapid action in the face of risks to life on the planet and survival, or others such as the role of the company in a new reality that demands corporate purposes. A multi-sector congress and exhibition space that focuses on Agenda 2030, to be held in May 2021 at Fira de Barcelona, and which responds to the current need to promote a framework for virtual reflection of a global nature, with special emphasis on Spain and Latin America, on the advisability of sustainability as a cornerstone in post-COVID global reconstruction.

Principles for a sustainable future for Latin America, in times of pandemic and planetary crisis

Signed by more than 150 representatives of politics, business and civil society from 15 Latin American countries, during the course of the conference, Yolanda Kakabadse and Manuel Pulgar-Vidal presented the Principles for a Sustainable Future for Latin America, in times of pandemic and planetary crisis. This manifesto has the support of BForPlanet, and outstanding personalities, including the former presidents of Chile and Mexico, Ricardo Lagos and Felipe Calderón, as well as former ministers of the environment from Brazil, Colombia, Peru and Guatemala.

The manifesto, which advocates a sustainable future for Latin America, stresses that «what we have experienced in this global pandemic crisis shows that it is possible to make structural changes. The world will not be the same when it emerges from this pandemic. We are confident in the capacity and sensitivity of current and future generations to create conditions for achieving a radically different common future, in which the human species assumes its responsibility for caring for nature and our fellow human beings based on scientific knowledge of natural laws, our creative capacity and the privilege of living on a planet capable of generating and regenerating its life systems».

The manifesto analyzes the causes of the crisis and its direct consequences in Latin America, urges governments to «address the health emergency by putting science at the center of political decisions» and proposes «leading the world to a new ‘renaissance’ based on, among other issues, «advancing towards an economy of well-being, not just growth», «renewing climate and biodiversity commitments in the framework of the Sustainable Development Goals (SDG’s)», and «developing new business models that integrate economic, environmental and social objectives».

As Kakadbase pointed out, «these objectives are applicable anywhere in the world in this situation,» to which Pulgar-Vidal added that «it seems that the SDG’s have been written for recovery.

With the meteorologist, oceanographer and Antena 3 TV presenter, Mercedes Martín, as the host of the event, BForPlanet-Live is the first of the meetings in which they have reflected on the validity of the SDGs in the face of post-COVID reconstruction and the need to promote alliances as pillars for a sustainable future, Jaume Collboni, first deputy mayor of Barcelona City Council; Damià Calvet, Minister of Territory and Sustainability of the Generalitat of Catalonia; Bernat Solé i Barril, Minister of External Action, Institutional Relations and Transparency of the Generalitat of Catalonia; Manuel Pulgar-Vidal, Director of the International Climate and Energy Programme WWF, former Minister of the Environment of Peru (2011-2016); Yolanda Kakabadse, former Minister of the Environment of Ecuador (1998-2000), was Director of the WWF Foundation (2010 – 2017); Juan Costa, Head of the International Division on Climate Change at Ernst & Young, former Minister of Science and Technology of Spain; Nicolás Cock, President of BioProtection Global; Daniel Truran, B Corp Ambassador to B Lab Europe, CEO of EBBF – Ethical Business Building the Future, impact innovator, speaker and activist; Augusto Lopez Claros, international economist with experience in entities such as the World Bank; Joan Tristany, CEO of AMEC; and Jose Carlos Diez, member of the advisory council for Latin America of the United Nations Development Program (UNDP).